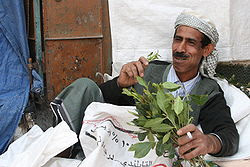 Image: For how long will he stay happy?


In my previous text about Yemen, I wrote about how we in recent years have been able to watch this poor country slowly run out of its only significant export product - oil. While this is bad enough, it is not, unfortunately, the only problem facing Yemen. In this second and final text about Yemen, I describe the cavalcade of problems facing the country besides falling oil production and dwindling oil exports.

If Yemeni oil is running short, what else can a poor, overpopulated country with few natural resources export? Besides oil, the main exports have been agricultural products and cheap manpower to richer neighbors (who send money home, known as "remittance"). Since Yemen’s problems are so numerous and large, this text could be very long. I have tried to keep the length down by listing some additional challenges that Yemen faces in bullets:

- The unemployment rate is between 20 and 40 percent. Despite this, a few thousand refugees from Somalia arrive every month. These refugees now amount to at least 150-200 000 persons and they further increasing competition for jobs, and, presumably, social tension.

- 20 years ago, a relatively large number of tourists visited Yemen. The numbers have declined and fell further when the Al-Qaeda began to attack tourists in 2007. Today, tourism has fallen by at least 90% compared to the peak years. Many of those who now visit the country are Yemenis living abroad traveling home to see their families.

- Yemen has high military expenditures and is fighting against Al-Qaeda in the east, separatists in the south and, especially, (possibly Iranian-backed) rebel clans in the north. The rebels in the north threaten to draw Saudi Arabia into an armed conflict. For Al-Qaeda, Yemen has become an important country (they thrive in collapsing states). For strategic and geopolitical reasons, the United States are also being drawn into Yemen, which may become “the next Afghanistan". 'An impoverished country that is strategically located on one of the world's busiest shipping lanes, Yemen has declared war on Al-Qaeda under pressure from Washington and Saudi Arabia. " In January this year, Obama said "So as president, I've made it a priority to strengthen our partnership with the Yemeni government".

- If Yemen advances from being a "failing state" to become a full-fledged "failed state" (they are currently in 18th place on the 'failed state index"), stability in the region will deteriorate further. With increased rebel, pirate and terrorist activities, it may be difficult for oil tankers and container ships to pass through one of the world’s most important sea lanes (with Yemen in the north and the "failed state winner" Somalia in the south) on their way to the Suez. Needless to say, traveling around Africa is a long and costly detour.

- The country has a very high rate of malnutrition - over one third of the population is undernourished (which is comparable to the poorest countries in Africa). Nearly half of the children between two and five years old are undernourished and show signs of stunted growth:

“[The boy] is 18 months old and severely undernourished. In an effort to save his life, his parents traveled a long way to the therapeutic feeding centre here in Taez Town, leaving behind another seven children, all under the age of 15. […] The baby […] had hardly eaten in days. He looked miserable, with sunken eyes and a dry mouth. When [he] did not show signs of improvement, his desperate family – facing a huge hospital expense – took him home. “We decided to take him back to where he belongs and trust God for his salvation,” said the boy’s mother.”

- In addition to oil, agriculture has been an important part of Yemen’s economy. But deforestation, soil erosion and expanding deserts make it difficult to maintain production. However, the biggest problem is the dry climate and water scarcity which has been "resolved" by (illegal) drilling of new wells to pump up groundwater. Over time, traditional crops which do not need much rain have been replaced by fruits and vegetables requireing irrigation.

- 50 years ago, an estimated 50 000 people lived in the capital Sana’a. To provide today's two million inhabitants with water is an enormous challenge, not least because the city is located 2,000 meters above sea level. Sana’a’s own groundwater is on the decline and is expected to run out completely in a few years. There have been talks about moving the capital as the situation is changing from bad to untenable.

- Did I mention the endemic corruption? The heavy administration? That the current President Ali Abdullah Saleh has been in office for more than 30 years (first in North Yemen and during the last 20 years in the united Yemen)? No? I may come back to that later ... if I get a small gift "under the table".

If you scrape on the surface, you will find many more other problems that could be highlighted. One historical example is how Yemen just two months after unification in 1990 bet on the wrong horse by supporting Iraq in the Gulf War - despite the fact that Kuwait and Saudi Arabia (until then) had provided important financial assistance to the country. As an effect of this gaffe, Saudi Arabia took the opportunity to expel almost one million Yemeni guest workers.

A contemporary example shows how several of the factors above interact. A camp with refugees from the unrest in the north houses 10 000 refugees. They people are poor and the children are undernourished. "Few of the displaced are used to washing regularly because water is scarce in Yemen, and few use toilets, preferring to leave waste in the open." This presents a problem when 10 000 people live close together and there are now fears of outbreaks of cholera in the camp.

In addition to geo-political and humanitarian problems that follow from reduced oil exports, a large and growing population, extreme poverty, internal strife and political instability, there is another major concern - perhaps the greatest of them all – which I would like to shed some light on, namely food and water.

"Yemen's water share per capita is less than 100 cubic meters a year, compared to the water poverty line of 1,000 cubic meters.” World average is 2500 m3 of water per person per year.

There is a shortage of water in large parts of the Middle East, but poverty and lawlessness makes the problem more difficult to address in Yemen than in most other places. Unlike wealthier neighbors, Yemen can not afford to build desalination plants, and tribal flare-ups and civil unrest makes it dangerous for engineers and hydrologists to travel to many parts of the country. Even water purification is difficult in Yemen. Existing facilities are poorly managed and some priests "have declared the reuse of wastewater to be a violation of Islamic principles".

Wells are drying up and the price of water has quadrupled in less than five years. The government is trying to prevent farmers from drilling new wells to the (rapidly receding) underground aquifers, but has little power – especially far away from the capital. It is easy to see a vicious circle with water scarcity and rising violence as its two main components.

A special problem for Yemen in particular is the strong cultural position of the mildly narcotic plant qat (khat). Most Yemeni men (and some women and even children) chew qat daily (some men can chew qat for 5-10 hours or more per day - see the picture above). "By 4 in the afternoon, most men walking the streets of Sana'a are high, or about to get high." Since qat reduces appetite, it contributes to malnutrition. In 2007, the World Bank noted that

"Qat […] drains the family budget; has adverse health effects; negatively affects work performance and thus contributes to poverty. Weaning consumers from the qat habit will be difficult, because its production accounts for some 6 percent of GDP and 14 percent of total employment. Qat consumption requires around 10 percent of the household budget of all income groups, which comes at the expense of basic food, education and health."

I have seen other (official) reports that almost half (!) of the money in some households is spent on buying qat. In addition, qat is a very thirsty plant that grows better when it gets more water. Different data indicate that between one quarter and one half (!) of all the water in this dry and thirsty country is used for growing qat. The output of qat has been growing every year, not the least because it is an easy plant to grow and because farmers earn much more by growing qat than by growing food. According to some reports, qat cultivation has increased 10-fold between 1970 and 2000 and has continued to grow explosively during the last 10 years. Like so many other things, qat cultivation is interconnected with other problems in a seemingly insoluble cluster:

"Despite the danger, Yemen isn't about to go cold turkey anytime soon. Not only are most of the country's leaders landowners deeply involved in khat production, the leaf may be one of the few things still holding Yemen together. [...] "Khat plays a big role in keeping people calm, and keeping them off the streets. But it's also delaying change. It's hard to convince people to act now."

It is hard to finish these two texts about Yemen with a "happy chapter" about how everything, despite all the problems, will be fine in the end for the 25 million people living in the country today (or the 60 million who are "estimated" to live there in 2050 - how that could ever happen). The best I can think of is to point out that Yemen, as far as I know, has not been affected by AIDS – in contrast to many poor countries in Africa...

But even without AIDS, Yemen is a dry, overpopulated, poor and violent country that lives on borrowed time. It is difficult to see how even very generous loans and assistance could keep an increasing societal disintegration at bay even during the next few years. Likely effects of a societal disintegration are migration, famine, growing lawlessness and more. We can expect to read more about Yemen in the newspapers in the near future (just as there are reports today about trouble in and around Somalia). A foretaste of what’s to come was given on Christmas Day, when the "underwear bomber” Umar Farouk Abdulmutallab’s failed attempt to blow up an American passenger plane put the perpetrator’s Yemeni Al-Qaeda training in the spotlight.


Here is a recent text that does not really add much to my two texts about Yemen, but that still supports these texts by describing the interconnected problems of water, violence, qat, al-Qaeda and the fact that the Yemeni capital Sana’a may become a ghost town within a decade or two. "Yemeni water trader Mohammed al-Tawwa runs his diesel pumps day and night, but gets less and less from his well in Sana’a, which experts say could become the world's first capital city to run dry".
.