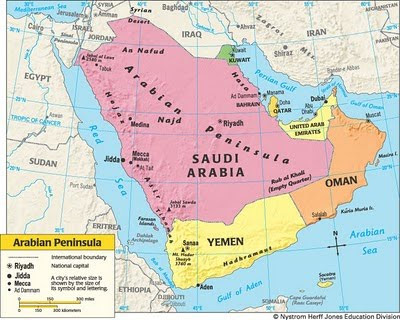 Almost a year ago I wrote a text [in Swedish] about Mexico's problems with oil production dropping dramatically. The past summer, BP Statistical Review of World Energy was published for the 58th time, and Mexico was the country whose oil production decreased the most in absolute numbers during 2008. The decrease, compared to the previous year, was more than 300 000 barrels of oil per day. That is more than 9% of Mexico's entire production, but only slightly more than 0.3% of global oil production. However, I placed the text about Mexico in a larger context; which countries are more, and which countries are less vulnerable to the changes that peak oil will bring?

Here I choose to continue with that theme - "countries that will have a hard time after peak oil" - and look closer at the Arabian Peninsula. The Arabian Peninsula is dominated by Saudi Arabia, and there has been some "fuss" about Dubai fairly recently, but here I focus on Saudi Arabia's smaller and much poorer neighbor to the south, Yemen. Where both Saudi Arabia and Yemen are facing similar challenges (large populations in relation to food production and availability of water), the countries have significantly different abilities to deal with these challenges since Saudi Arabia is a very rich country whereas Yemen is very poor. But first a little detour.

Before a trip to Morocco 10 years ago I read a travelogue about "Arabia". The book, "Arabia Felix: The Danish Expedition of 1761-67", was about a scientific expedition to Yemen, where a disciple of the Swedish botanist Linnaeus, the talented Peter Forsskål, participated. The expedition started in 1761, and two and a half years later Forsskål died of malaria in the city of Jerim. Conditions on the expedition were tough to say the least, and only one of five expedition members returned to Europe six years after the expedition started. My memories of the book are now somewhat vague, but I remember that the image of "Yemen" (southern Arabian Peninsula) was not very attractive. Sparsely populated, very poor already then and with an unbearable climate:

"The climate is very hot and humid along the coast, temperate in the western mountain region with monsoon rains, extremely hot and dry desert climate in the interior of the country. There are significant differences in temperature, particularly between day and night. In the summer, daytime temperatures may reach 40 degrees [Celsius], in the winter the temperature at night may reach below freezing."

When South Yemen and North Yemen were unified and became Yemen in 1990, the new country was one of the poorest in the world, and it is still the poorest of all countries in the Arab world (GDP per capita is below U.S. $1,000/year). Approximately 40% of the population lives on less than $2 per day. Only 50% of the women are literate. The society is strongly patriarchal with polygamy and a high rate of infant mortality.

Demographic trends in this barren and resource-poor country, despite, or perhaps because of poverty and patriarchal traditions, have been explosive; in just 50 years the population has quadrupled! The average family size is seven people and two-thirds of the population is under 24 years of age. On a surface that is only slightly larger than Sweden, but considerably less hospitable, almost 25 million people live. Since the birth rate even today is the fourth largest in the world, population is expected to rise to 40 million by 2030 and 60 million by 2050. I am skeptical that this will actually happen, because Yemen has Very Big Concerns.

Yemen is not a very well known country, and since some Arab countries have huge oil reserves and others do not, it might not be easy to place a country on the world oil map. Yemen is a country that has oil, albeit in small quantities. And the oil reserves are shrinking rapidly. If Mexico was the country whose oil production fell the most in absolute terms in 2008, Yemen was the country whose production decreased the most in relative terms - the oil production fell by a whopping 11.6%.

Mexico has "only" reduced its oil production by 17% since its peak in 2004, and Yemen also beats Mexico hands down in another respect. Whereas oil revenues account for 40% of the Mexican state budget, they account for more than 70% of Yemen's national budget! Moreover, oil accounts for almost 90% of the value of Yemen’s exports and as much as 30% of Yemen's total GDP. The figures for the entire year of 2009 are not yet ready, but the figures for the first 10 months of the year look disastrous. It was a bit difficult for me to get all the figures together, but some detective work from various sources yielded the following:

This trend illustrates well the so-called "Export Land Model". The model states that exports from an oil-producing country may drop very quickly if the country chooses to increase (or maintain) its domestic consumption while production falls. And the domestic oil consumption actually has increased in Yemen. According to some data (from a good analysis which largely overlap with this text), domestic (subsidized) oil consumption increased by as much as 50% from 2001 to 2009, that is, during the same period that oil production declined by more than 30%. Consequently, from 2001 to 2009, oil exports declined by more than 50%!

The figures from the first 10 months of 2009 indicate that Yemen only managed to export slightly less than 25 million barrels (which implies at the most 30 million barrels for the whole year). Thus it looks like the domestic oil consumption during a period of four years from 2006 to 2009 has risen each year, while oil exports - the country’s largest, total dominant and almost only source of income – has fallen by a shocking two-thirds during that same period of only a few short years (from 85 to almost 30 million barrels). The trend is clear – oil exports have fallen by around 20 million barrels per year during the last three years and if nothing drastic happens, Yemen already would, at some point during 2011, have to import oil to meet domestic needs. But with what money?

In addition to the domestic oil consumption "stealing" oil which could be exported for much-needed revenue, the government spends hundreds of millions of dollars each year to subsidize the domestic (increasing) energy consumption. Already in 2005, various subsidies were the single largest item in the state budget, and subsidies of fuel amounted to nearly 25% of total government expenditure. Despite demands from the World Bank, Yemen has failed to reduce its subsidies on oil and electricity (all electricity in Yemen is generated by oil-fueled power plants). When the government actually tried to reduce these subsidies in 2005, the result was riots. Because of the failure, the World Bank reduced its contributions to Yemen by a third.

From 2008 to 2009, in addition to a dramatic reduction in oil exports by one third, the average price of oil dropped from 107 to 60 dollars/barrel. This resulted in a decline in oil export revenues from more than 4 billion U.S. dollars to less than 1.5 billion U.S. dollars for the first 10 months of the year (an amazing decrease of two thirds from one year to the next!). Yemen’s oil production is projected to continue to decrease every year and may be a closed chapter within 10 years. Previous years' upward trend in oil prices did until 2009 mask Yemen’s problem of declining production and declining exports, but now the problems appear terrifyingly clear.

It is appropriate to point out that Yemen has recently started to export liquefied natural gas (LNG), "Production of LNG began in October 2009. The Yemeni government expects the LNG project to add U.S. $ 350 million to its budget." That this would fully compensate for the decline in oil production is, however, an impossibility; "Yemen has done little planning for a post-petroleum economy, and most analysts doubt state expectations that natural gas will be able to fill the void left by oil."

This text will be followed by a second and final text about Yemen’s problems (yes, Yemen has many more problems than "only" that the dwindling oil production). Already after this text one may conclude that Yemen is smoldering – and it gets worse...
.
Posted by Magnus K at Monday, March 22, 2010