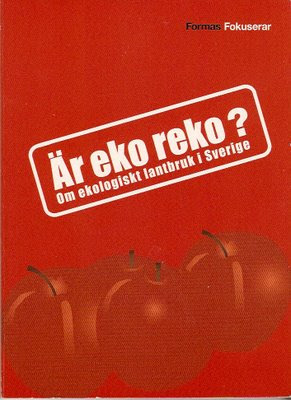 The Swedish Research Council for Environment, Agricultural Sciences and Spatial Planning (Formas) publishes “Formas Fokuserar” (“Formas Focuses”) - a series of paperback books where Swedish researchers have their say and write short, simple texts on current issues. The book "Is Eco Ok? On organic farming in Sweden" (2003) was the first book, and by now Formas has published some 15 books in the series. The books are usually a few hundred pages long, but this particular book is very neat (smaller in size than a pocket book) and thin (115 pages). Nevertheless, the book contains no less than 13 texts by 18 different authors. Most of the authors have connections to (different departments at) the Swedish University of Agricultural Sciences (SLU).

Although the book is aimed towards an interested general public, parts of the contents was quite unfamiliar to me, and I learned a few new things when I read the book: "Manure is composed of feces, urine, bedding straw, feed residues and water. Depending on consistency, manure is classified as liquid, semi-liquid, solid or deep litter."

I have previously written [in Swedish] about other books that deal with agriculture's dependency on oil. In this book, however, energy and oil plays a subordinate role and you have to figure out the connection yourself since none of the authors have (or barely even mention) such a perspective. Instead, the starting point of the book, as formulated in the introduction, is that "Scientists do not agree on which type of cultivation is best for human health and the environment - conventional or organic. What do they really know about the differences? That is the question this book wants to answer."

Although the book is seven years old, a debate flared up in Sweden recently pertaining to the book’s main question; which kind of agriculture is best - conventional or organic? Marit Paulsson (Swedish member of the European Parliament and mainly involved in agricultural politics) published a new book where she claimed that conventional agriculture is our only hope if we want to grow enough food for all of mankind. "Yields are lower in organic farming. The surface of the earth is not big enough to grow organic food for everyone, therefore it is not a sustainable global solution. It is more important to find pesticides that are better than the ones used today."

A week later, DN (the largest morning newspaper in Sweden) published a longer article where both critics and proponents of organic food stated their claims. The claim that organic food has smaller yields and is therefore a problem from a global perspective is only partly true. The biggest problem during the past few decades is not that there is not enough food on Earth, but that the poorest people don't have enough buying power to compete for the food that is produced.

For us living in the rich countries food has never been cheaper - we have never spent such a small fraction of our income (around 10%) on buying food as we do today. The problem is that there are no incentives to grow food for paupers who can not pay for themselves, and that we in the richer countries are not prepared to spend a whole lot of money on buying and giving away food to the poor. If the 25% poorest people on earth (living on $1.50 per day or less) were ten times richer, we would automatically (due to market mechanisms) grow more food and less bio-fuels for cars. In addition, we would grow more crops for humans and less crops for animals (meat production is inefficient). And we would throw away less food. I see hunger today more as an effect of the uneven distribution of wealth, than as a matter of an absolute and inevitable global food deficit.

The arguments for or against, and the differences between the two types of cultivation (organic and conventional) are various and multidimensional. Consequently, there are often uncertainties about the results of different studies, and there is room for different players (who have different ideological and economic interests to defend) to interpret the findings in different ways. The issue is further complicated by the fact that there may be larger differences within one type of cultivation than between the two types, depending on for example agricultural intensity, the lay of the land (landscape) and the farmer’s attitude to biodiversity. But let us start from the beginning and go through the dividing lines.

Conventional agriculture uses inorganic fertilizers and chemical pesticides. Organic agriculture instead uses alternative methods and stresses the need to harness natural processes. Organic farming in Sweden is today largely equivalent to KRAV-certified food. KRAV is an acronym for the Swedish Association for Alternative Cultivation, an organization that was founded in 1985. KRAV establishes minimum requirements that must be fulfilled for certification, and inspects the production at all KRAV farms at least once a year. Farmers may follow KRAV rules by personal conviction and/or for economic reasons.

As for fertilizers (which provides nutrients to the soil), conventional farming uses inorganic fertilizers and organic farming uses manure (animal poop :-). Neither is good in too large quantities, and since manure is a 'live' product, it is more difficult to dose.

Previously, crops and livestock were integrated on the farm and nutrients circulated naturally between them. Now the animals disappear from the mid-Swedish farms and areas for grazing are there replaced by grain production. The grain is then transported to the southern parts of Sweden where the animals are nowadays located. In order to compensate for the absence of animals in mid-Sweden, farmers have to add inorganic fertilizers. In southern Sweden, the number of farms is decreasing, but the number of animals on the remaining farms is increasing. There, large amounts of manure tends to become a waste product rather than an asset.

There is simply no incentive to take care of manure in conventional farming since inorganic fertilizer is used instead. One weakness is that excessive use of inorganic fertilizers is based on the undeniably doubtful assumption that there will always be cheap phosphorus and cheap natural gas available to produce these fertilizers in the future.

The second difference between conventional and organic farming has to do with the use of pesticides. In the old days, weeds and pests were kept under control by letting different plant species follow each other (crop rotation). These methods have been replaced by a more one-sided, high-yielding and economically profitable agriculture. You can now grow the same crops for many years in a row and solve the resulting problems (weeds and pests) by using chemical pesticides. During the first half of the 20th century, weeds were removed by hand. With the help of large mechanized farm machinery, it is now possible to fight weeds and pests at 10 kilometers per hour and 12 meters wide at a time.

Unfortunately chemical pesticides used in agriculture contain at least 140 different substances. They are sprayed directly on crops which are used as food for humans or to feed animals, and pesticides are actually poisons whose purpose is to harm living organisms. Traces of pesticides are found in the food we eat and in the water we drink, but in small quantities and below legal limits. However, little is known about possible long term effects and about the interactions between different substances. There is no evidence that the substances we use today have long-term health effects on humans, but some pesticides are persistent and could cause long-term problems which in the worst case takes a lifetime to make themselves known. Something we can be quite certain of is that pesticides have indirect effects that are quite unfavorable:

"pesticides have led to changes in flora and fauna of the agricultural landscape and is one of the reasons why biodiversity is reduced. [...] Food availability in the form of insects, spiders and weeds is reduced. This has caused bird life to decline greatly since the 1970's. An important aspect of plant protection is that the pest's natural enemies are disfavored by the chemical substances, which in turn may lead to an increased need for pesticides. "

Biological diversity may in this context be viewed as an insurance. If the environment and the climate changes, species which do not seem important today may prove to be so tomorrow. Historically, agriculture has led to increased biodiversity. However, during the past 60 years, with agriculture developing towards more specialized and large-scale farms, biodiversity has instead decreased. Biodiversity benefits from that which characterizes organic and conventional agriculture - the absence of pesticides, grazing animals that add organic manure to the ground, crop rotation, micro-climates/small habitats in the landscape etc.

Large-scale farming has also reduced the genetic diversity of cultivated crops and animals in recent decades. Globalized breeding and processing of crops is accelerating this trend and threatens to replace the more local varieties with high yielding animals and genetically modified crops (GMOs). By optimizing on a single factor - such as economic efficiency – one must always sacrifice on other factors - such as biological efficiency. Reduced genetic variation and larger production units makes the food system more vulnerable, for example by increasing the risk that a disease will have a huge impact on the global food production system.

The equivalent of pesticides for animals is the routine deworming with chemical substances that is used in conventional agriculture. Organic farming has not been able to develop alternative methods that achieves the same result, although farmers in the old days knew quite a lot about how to limit the impact of parasites.

In addition to the keywords environment and health (both for animals and consumers), questions about food and agriculture seem to revolve less around facts about specific sub-issues than around perceptions of the whole. An example is the fact that consumer perceptions are not always consistent with what is actually best for the animals. We navigate a wide range of perceptions and forces encompassing ideology, ethics, lifestyles, environment and profitability, and we judge things based on ideological, utopian, scientific and pragmatic ideas.

A perspective that is sparsely represented in this book is the question of how sustainable current agricultural practices are based on their dependence on oil. A very good (50 minutes long) documentary from the BBC, "A farm for the future", is all about this. The book mentions in a few places that a lot of fossil energy is needed to produce inorganic fertilizers and that organic farming uses less energy than conventional farming. These facts are not emphasized though since the knowledge of a near-term peak in global oil productions and an understanding of the implications thereof did/does not yet exist in the minds of the man-on-the-street (or the run-of-the-mill researcher in the ivory tower of academia).

It is frighteningly clear - from a peak oil perspective - that conventional farming won't be conventional for that much longer. Unlike Marit Paulsen, I would argue that it is conventional agriculture that is not sustainable in the long run. An fossil-free organic farm is sustainable – but it may unfortunately prove to be the case that what is unsustainable is 6.7 billion persons on Earth (and counting...). That organic farming does not use chemical fertilizers and pesticides is a necessary but not sufficient condition for sustainability in the long run. Today, we face the challenge of finding alternatives to mechanized, oil-consuming farming, and simultaneously produce enough food for everyone. Food is likely to become more expensive in the future, and what does that mean for the poor people of the world who do have no access to land in the urbanized present?
.
Posted by Magnus K at Wednesday, April 21, 2010