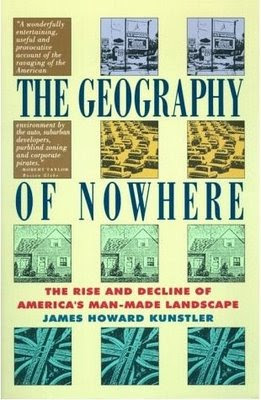 Although James Howard Kunstler’s "Geography of Nowhere: The rise and decline of America's man-made landscape" (1993) is more than 15 years old, there are good reasons to take a look at his book at this particular point in time as it clearly is more relevant today than when it was published. In hindsight, it is possible to see that much of what James wrote was on the spot - almost prophetical - even if it is only now that this is becoming more and more obvious to more and more people.

James is a man with an almost sacred mission, and he preaches his doctrines as intensively as a teleevangelist preaches the glory of Jesus. He hammers in his message again and again and repeatedly comes back to two issues that overlap and interact and that penetrate all aspects of Americans’ daily lives; cars and houses. Anyone who wants to get to know James’ very critical views can check out his blog, Clusterfuck Nation, where he writes a new column every Monday.

There is a whole complex of issues and industries that interact around cars, energy (oil), financing, road construction, (lack of) public transportation, politics, philosophy, etc. Houses (buildings) are really much broader than just the domiciles we live in and comprises both of private homes as well as commercial and public buildings. The way U.S. houses have been built, and cities designed, and the central role of cars all depend on each other, meet and are bound together by the arteries of American Society – its roads.

Since I have have lived in the U.S. myself, several questions that I have wondered about are answered by this book. Why are most neigborhoods in the U.S. built so that it is impossible to manage without a car? How is it possible to build roads without sidewalks in residential areas? Why are there are no neighborhood stores and why is the nearest supermarket always so far away? Why are the streets amazingly broad even in quiet residential neighborhoods? Why are so few people taking a stroll through their neighborhood and why are so few places within walking distance that are worth visiting in the first place?

The last question is not difficult to answer. The streets are broad, the blocks are huge and the distances are large; it is incredibly monotonous and boring to walk beside a completely straight road for 20 or 30 minutes. The whole environment is constructed so as to be traversed safely by a car traveling at 40-60 km/h and the restless brain of a curious human is just not getting enough stimulation when you are out walking in an American residential neighborhood. It is similarly very boring to walk any longer distances next to a Swedish highway or expressway.

Regardless of what the actual speed limits happen to be, the 12 meter wide roads of American suburbia are designed to be ultra-safe (for drivers) so that even a mediocre car driver can whoosh by in 70-80 km/h without risking the destruction of the car. The primary function of those roads is to channel suburban cars to the highways. The big losers of this arrangement are children who can not move freely outside of their homes without risking life and limb (beyond the fact that there are few destinations worth visiting within walking or biking distance).

Since children still need to get to school, many ride school buses to get there - a separate public transport system that "operates at huge expense, is restricted to children, and runs only twice a day". Based on their limited freedom of movement, it is understandable that many young Americans’ highest dream is to have their own car as soon as they reach the age of 16. James notes that it is basically impossible to live in any U.S. neigborhood built since 1950 without having access to a car.

”long-distance car travel on an interstate highway is literally like going nowhere fast”. […] There is little sense of having arrived anywhere because everyplace looks like noplace in particular. […] we chose to live in Noplace, and our dwellings show it. In every corner of the nation we have built places unworthy of love and move on from them without regret.”

James writes a lot about the crappy architecture; outside of the cities cookie-cutter houses and shopping barns are erected – buildings of poor quality that do not deserve our love, or even to be taken care of. Little of what is built is meant to last for longer than in a decade or two, which means that as houses have “progressed” from being crafted to becoming a commodity - which are now consumed. In many places in the U.S., the plot is worth much more than the house and it is not uncommon to tear down an old house and build a new, rather than to maintain something that was never meant to withstand the test of time. Over time, the emotionally-charged “home” has moved towards becoming an interchangeable “house”, a place where a family “happens” to reside, eat and sleep at the moment, but which can quickly be “flipped” if something better turns up.

James was very aware of the importance of oil to the American economy and of America's dependence on (imported) oil already back in 1993 when he wrote the book. He warned aginst continuing on the road taken, but was of course preaching to deaf ears. In addition to (significant) negative social effects of an atomized and dispersed society, and adverse effects on human physical and mental health, James characterizes the built environment of the U.S. as the greatest misallocation of resources ever:

”America has now squandered its national wealth erecting a human habitat that […] will not be usable very much longer […] suburban sprawl is too expensive to operate, too costly to maintain […]. To lose it is tragic not because America will be deprived of such wonderful conveniences as K-Marts and drive-in churches […] but becuase it was a foolish waste of resources in the first place, and it remains to be seen whether its components can be recycled, converted to other uses, or moved.”

Today, 15 years later, we can in hindsight see that instead of changing direction during the 1990s and early 2000s, the course of action was to press the accelerator, borrow more money, build more houses and more suburbs, buy more cars and build more roads. James already at the time predicted that based on the enormous amounts of resources that had already been squandered by building a car society, the course of action would be to continue to "throw good money after bad" rather than attempting to imagine alternatives and ways to change society so as to make it less dependent on cars (and oil).

Many different factors now conspire and together indicate that we have reached the end of the road, and that James's 1993 predictions are coming true, "Today's posh suburbs could easily become tomorrow's slums." Very shocking to me was this one year old and 12-minutes long film, "Foreclosure Alley" from Southern California. In the wake of “epidemic” of foreclosured homes, new depressing business opportunities appear; spraying brown dead grass green so as to make the plot and the house look more vibrant and attractive, and, to empty and throw away all that is left behind in a foreclosured house, including furniture, photographs, toys, food and fully functional consumer electronics in the shortest possible period of time. Some of yesterday's brand new suburbs (the most recently built which are furthest away from the cities) are becoming ghost towns where squatters and criminal gangs move in as the previous homeowners move out and leave empty houses behind.

Although the U.S. is in the eye of the storm when our current solutions for transportation and and housing are "challenged" after peak oil, we Europeans can not sit back and believe that we will escape the coming changes unharmed. But it is a fact that our position is significantly better. Already in the nascence of “happy motoring”, in the early 1900s, Europe was forced to import the majority of its oil while the U.S. had huge, seemingly endless resources of oil. Even though there are many car-huggers also here in Sweden, our relationship with the car is still a pale copy of the Americans' long love affair. We have smaller, more fuel-efficient cars, higher gasoline prices, more dense settlements, we drive less, build fewer and narrower roads and have better developed public transportation systems. Our starting point is thus in many ways better, but unfortunately also we tend to - even in this late hour - to place headless bets on more airfields and runways and on expanding or building new highways, instead of more cycle paths and better public transport system.