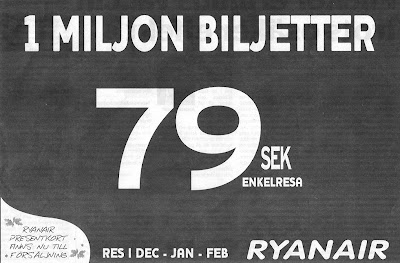 Picture: Ryanair ad, offering to sell us 1 million airline tickts for 79 SEK or less (10 dollars or less) from Stockholm to a variety of European cities. The price corresponds to the cost of two (so-called) meals at McDonalds.


In the previous text I wrote, I suggested that we could - at least from a historical perspective - for all practical purposes regard energy as free or charge in today's society. As a special case of this it thus follows that also transportation is free of charge. That is the topic of this text, but it is written from a completely different perspective compared to the previous text, because the inspiration comes from a book about designing virtual worlds!

In medieval times, it was expensive to transport goods around Europe. Wine was a drink for peasants in France, but if you transported the wine to Scotland, it suddenly became a drink only for wealthy nobles. The cost of transporting wine the - to us - fairly modest distance from France to Scotland was so high that wine after such a trip immediately became a drink for only the very richest of persons. In medieval times, most products were simply not worth transporting for any longer distances and were instead produced and consumed locally. Also moving you own self (to travel) was "expensive" in terms of time, money and effort. It is not a coincidence that the French word for work, "travailler" has the same root as the English word "travel". To travel was time consuming, laborious and expensive.

In a virtual world (such as Second Life or World of Warcraft), there are no logical obstacles that stops you from immediately transporting goods or yourself from one end of the (virtual) world to the other. Actually, there is no physical "world" there in the first place, but rather just a large database that keeps track graphics and points of view, of where everything is and what is behind the next (virtual) hill. In some virtual worlds it is thus possible to immediately teleport yourself (and your possessions) from and to wherever, but most worlds are designed in such a way so as to impose artificial restrictions that make travel a little bit more time-consuming and laborious. Without distances that take (some) time to overcome, the geography of the virtual world would "collapse" and everything would be next-door to everything else. It then becomes rather pointless for the designers of the virtual world to spend time designing roads that will never be traversed and stunning vistas that will never be admired by anyone. There are also other (predominantly negative) implications of absence of (virtual) distances and geography that most desingers choose to avoid or restrict when designing virtual worlds. My point here though is that teleportation is technically feasible and argubly the most "natural" way to move in a virtual world, and that all travel and transportation could be free in such a world (immediate and at no cost).

Today we ship goods around the globe in staggering volumes without this increasing the price of the product to any significant degree. Where a factory is located on Earth in the era of globalization has little to do with transportation costs. The actual transportation of a barrel of oil from the Middle East to Europe or the United States contributes only with a price increase of a single dollars per barrel (and last year the price of that barrel fluctuated roughly between 50 and 150 dollars).

Furthermore, Ryaniar (see picture above) will fly me to 35 destinations from Stockholm and the ticket to almost two thirds of these destinations (in a dozen different European countries) costed 10 dollars or less last Christmas (including taxes and charges)! Is it physically possible to push prices lower? Have transportation and travel ever been as cheap as today? The answer to both questions is “no”, simply for the reason that 10 dollars for an airline ticket is so close to free that it makes no difference compared to a price of 5 or 3 dollars. Will transportation and travel continue to be this cheap in days to come? Well, no, of course not.

If we raise our eyes and adopt a historical perspective that extends a few hundred years back in time (before we found oil, before we started using large quantities of coal and before the industrial revolution began) we can again conclude that energy in modern society for all practical purposes has been, and still is free of charge. It thus follows that also transportation and travel is free today (at least from a historical perspective).

In what other society or era has it been possible for the least affluent members of a society to spend an evening babysitting or to rake leaves from someone’s lawn and use (part of) the proceeds to jump on a plane from Stockholm to Prague or Dublin? A one-way trip with Ryanair to these and some other destinations had a price tag of less than 3 dollars (30 SEK) last year before Christmas! Isn’t the world upside down when what I need in order to cook a dinner at home costs more than a flight to Berlin? The 16-year-old girl next door put a note in our mailbox the other day offering her services as a babysitter for an hourly rate of 8.50 dollars during weekends...

It’s not that I begrudge "poor" Swedes the opportunity to travel abroad, it's just that I think the situation is not stable or sustainable in the long run. If oil (and thus fuel and thus transportation) is no longer free, but instead begins to Cost Big Time - say, “only” three or four times more than today - the airline industry would crash and burn in every way possible except literally.

As more than 80% of the energy we use on Earth comes from non-renewable fossil fuels, what will happen when we during this century will have to gradually adapt step by step to making do with the energy that is created and re-created each year with the sun as the source (sun, waves, wind, hydro, biofuels)? The reasoning above and in the previous text give some clues as to the type of changes that lie ahead of us this century, and that will most probably start to reshape our lives already during the next decade...

PS. Should I take the opportunity to travel now while it is still inexpensive or should I refrain?