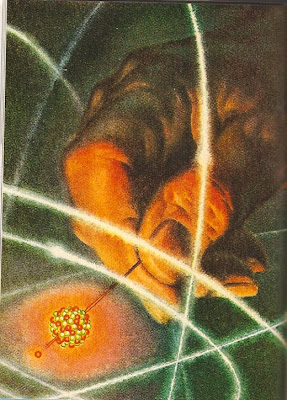 A little more than 50 years ago, Lewis Strauss, chairman of the U.S. Atomic Energy Commission, proclaimed that the promise that nuclear power brings is that "It is not too much to expect that our children will enjoy in their homes electrical energy too cheap to meter". The phrase "too cheap to meter" occasionally pops up when an accusing finger points at that phrase as proof that nuclear power has not fulfilled what it promised, or more generally, that new technology is always hyped and that the hopes of techo-optimists are not to be trusted. The idea I explore here is instead that energy for all practical purposes has been and still is free of charge (but that this of course will change radically when peak oil becomes apparent to everyone).

By some calculations based on local Swedish conditions (Flygare and Isacson, 1999), 19 days of manual harvesting - hard physical work 200 years ago - has been replaced by an hour of driving a tractor today. We have in similar ways replaced the vast majority of physical labor by humans or animals - days of toil and sweat moving rocks, logs or merchandise - with the energy contained in one gallon of petrol or diesel. The most common use of petrol today is of course to quickly move hundreds of millions of big heavy metal containers - with (usually) one person inside each - back and forth, back and forth. The average Swedish car weighed more than 1 400 kilos in 2007 according to statistics from the Swedish Institute for Transport and Communications, SIKA.

The term "energy slave" represents the amount of energy needed to replace the work of a manual laborer. The energy content of a gallon of gasoline is roughly equivalent to the force a person can develop during one month of hard physical work. The implication is that in the western world we all can be said to have many energy slaves working for us 24 hours a day in order to maintain our current high-energy lifestyles.

The average American has according to some estimates a three-digit number of energy slaves and even though we Swedes may not have as many slaves, we still play in the same league. Exact estimates of the number of energy slaves varies widely, but the point of using the concept is to convey an understanding in more human terms of the fact that each one of us - unconsciously and perhaps feeling that we are entitled to - make use of large amounts of energy in order to maintain our modern western lifestyles. In ancient Egypt, 95% of the population was directly employed in agriculture and they managed to (only) generate a surplus of energy (food) that was sufficient for feeding the remaining 5% of the population who were slaves and built the pyramids. In "the bad old times" energy was thus Expensive.

The next step here is to show not only that we today use energy in abundance, but also that this energy is very very cheap. I here borrow from Richard Heinberg who argues that it has been sufficient to work for 20 minutes with a statutory minimum wage in the U.S. in order to afford a gallon of gasoline. Twenty minutes of (probably not very physically demanding) work thus gives us access to energy equivalent to up to 200 hours of hard physical work. Exchanging 20 minutes for 200 hours gives us an exchange ratio of a factor of 600 (and far higher if you have a higher salary)!

It is thus impossible to deny that energy is very cheap today. With a longer historical perspective, energy is so incredibly cheap that it can for all practical purposes be regarded as free in our modern society. It might not feel that way when you pay at the pump or when you get the electricity bill, but it is very much so in a longer historical sense. The only reason the electricity bill hurts is because we use so insanely much of that product. A traditional light bulb of 100 Watts uses as much energy in an hour as (or is on par with what) a man performing hard physical labor (an energy slave) can develop during the same amount of time! If electricity was generated by bodily work, we would need an extra man working for us for each lightbulb we wanted to have lit. Low-energy lightbulbs are of course preferable, but we have at this point not even begun to talk about the costs of keeping the fridge, stove, washing machine or our consumer electronics running, or the costs for heating water for a shower.

Perhaps it is possible to push this argument a little bit further and claim that as long as we as a society can afford to maintain our current lifestyle, energy for all practical purposes remains free. When then would energy start to cost? Well, maybe when:

- we as a society must make difficult choices that may seem radical today.
- we discover that the amount of energy (electricity, gasoline, heating) we can purchase with 25% of our disposable income has shrunk considerably, forcing us to make some hard choices.
- most individuals can no longer afford to own/drive cars
- we no longer can afford a summer cottage or to go on vacation (forget abroad)
- we can not afford to heat or cool our McMansions (and forget the pool)

Living conditions is a hidden “energy thief” that many might not think about even though it costs significant amounts of energy to build, heat and maintain our housing. The average Swede has access to 44 m2 (475 ft2) of dwelling per person - an increase of over 60% since the late 70's. Other more authoritave sources such as Statistics Sweden report figures as high as 55 m2 (600 ft2) per person which would mean that we Swedes have doubled our living space per person in as little as 30 years.

According to Jonas Frycklund, an economist at the pro-industry lobby group Confederation of Swedish Enterprise, the average living space per person in the U.S. is 70 m2 (750 ft2) per person. That figure might be correct but as it so happens, Jonas also thinks that we will live in larger houses and consume more in the future and he confidently looks forward to when "the children of our grandchildren will relax in their pools and with good conscience reflect on the fact that that they do not exert any pressure on the environment."

Sweden has the largest number of single households in the world and Stockholm is the top single-household capital of the world. It is obviously more expensive (and more energy consuming) per person to live by yourself rather than to share a household with others. No less than 47% of all households in Sweden are single households and a further 28% consists of two persons. In one part of central Stockholm, Kungsholmen, 80% (!) of all households are single households (I do not know if a single parent qualifies a "single household"). Is it sustainable to have so many refrigerators and stoves and TVs in so many relatively large and sparsely inhabited apartments? Not in a world where energy is no longer free, because in that world we will have to crowd together and share the cost...

Some of the figures presented above can be contested and discussed. There are several factors that you could examine further, for example:

- Exactly how does one define an "energy slave"? Input (energy in terms of food) or output (work you get)? What force can a human being sustainably exert during 8 or 10 or 12 hours of hard physical work?
- How many hours does one month's work consist of? 160 hours (40 hours/week x 4 weeks/month + some holidays) or 320 hours (12 hours/day x 6 days/week)?
- What is the minimum wage (and the average wage) in the US and elsewhere in relation to the price of gasoline (or electricity).

None of this however changes the basic argument proposed above. Energy is from a historical perspective incredibly cheap – for all practical purposes free - and in the long term (beyond the oil peak) practices that we very much take for granted will by necessity be reshaped and altered or altogether disappear. Our challenge is to ensure that “different” does not necessarily and unilaterally mean "worse", but that we can rather find good solutions that can work in a sustainable low-energy society.

After I started to play around with the idea that energy today is free of charge (this text) and that transportation therefore is free or charge too (the following text), I have acquired new conceptual glasses that allow me to see the world in new ways. Media theorist Marshall McLuhan noted that we do not know who discovered water, but we do know that it was not a fish. The point is that it is difficult to see what we swim in, is surrounded by, and take for granted. It is easier to become aware of your own culture and the things taken for granted when you are abroad, when you discover that things work differently there and gain the opportunity to reflect on the differences between here and there.

The same is true for energy and transportation. Our society takes the stable supply of cheap energy for granted to the extent that we are not aware of this fact and have a hard time imagining any alternatives. Only with a provocative claim that "energy is free of charge" - which of course is not true in the literal sense - can we start to think about and recognize the full scope and the implications of what will happen - in all areas - when energy no longer is free, but instead will Cost Big Time.

When I went to IKEA at two p.m. in mid-November last year, I all of a sudden opened my eyes to the fact that there were thousands of lamps along the highway that were already starting to light up. And when I one hour later sat in IKEA's autumn-decorated restaurant, I noticed that I was surrounded by yet more lights in all the windows. It is at times like these that you lean back and ponder. … for example on the fact that the gasoline for driving 25 kilometers back and forth to IKEA only costs a few dollars and that the late lunch at IKEA therefore still was much cheaper than if we would have stayed at home and gone around the corner for a lunch at the neighborhood pub...

Who is today thinking about electricity consumption and the cost of power when we buy a food processor or a DVD player? You and me both, for all practical purposes, treat energy as if it was free of charge. Try to argue against it!


This text was originally published in Swedish on December 2, 2008.