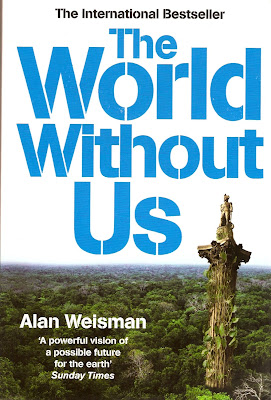 Alan Weisman’s book “The World Without Us” (2007) is perhaps the book with the least obvious connection to Peak Oil among the books I have chosen to write about on this blog so far. However, by putting on my Peak Oil glasses, it is possible to find an intersting enough angle from which to approach the book.

Weisman describes what would happen to our pets and zoo animals, our skyscrapers and roads, our bridges and houses. In a fascinating chapter, he describes what has happened to the district Varosha, which is located in an untouched no man's land in Cyprus ever since its sudden abandonment in 1974. Similarly, he describes what has happened to the city of Pripyat as nature has gradually regained the city and its surrounding areas since the abandonment of the city due to the nearby Chernobyl accident in 1986.

Weisman laconically observes man's hubris and folly - there are so many examples of both in the book that you quickly lose count. What is there for example to say about a lake (next to a factory for chemical weapons in Denver) that is so toxic that ducks die just moments after they land in the water, and aluminum-bottomed boats rot away in less than a month? I suspect that Weisman expects mankind (or at least all human civilization) will disappear from the face of the Earth sometime between tomorrow and a hundred years from now. However, the author maintains his poker face through the book and it is ultimately impossible to determine his attitude to man's disappearance.

The book is exciting and it sold very well in the U.S. What I briefly will focus on in this text, are those parts of the book that specifically deal with energy issues. I also intend to write a follow-up on blog post about plastics – a fantastically flexible petroleum product - by using the book’s chapter about plastics as a springboard for further thoughts on that matter. For the audio-visually oriented blog reader who does not want to read the book "The World Without Us", I can recommend the film Aftermath: Population Zero, and the 20 episodes long post-apocalyptic-science-fiction-speculative-documentary-television series Life After People.

So... what would we humans leave behind us on Earth if we suddenly disappeared? It would not be our illuminated cities, for sure, because without people the flow of electricity would quickly come to an end. We have on the other hand quite some reprocessed uranium lying around. Naturally occurring uranium in the earth's crust consists of 0.7 percent U-235 (half-life 700 million years). We humans enrich (concentrate) this uranium isotope, and in the U.S. alone there are 500 000 tons of depleted uranium (half-life 4.5 billion years). Depleted uranium is a heavy and tough metal with several applications, for example armor-piercing grenades. After having been fired, such grenades will keep emitting radiation throughout the earth's remaining lifetime...

Almost all radioactive waste (fuel rods as well as gloves) is now stored "temporarily" at various locations above ground - in the U.S. there is only one place for permanent storage below ground, and there they do not handle the really toxic stuff, but only "low-and midlevel waste". With humans gone, there will sooner or later be a fire close to radioactive waste, and radioactive ashes will then spread across oceans and continents. (Even today, with humans present, the control is not always the best - many accidents have occurred where radioactive waste has leaked out).

In Sellafield in England, liquid radioactive waste is mixed with molten glass and large glass block are then stored in air-conditioned warehouses. In this case, there is no need for a fire - a permanent lack of electric power is enough for temperatures to begin to rise and accident to become a given. The same goes for all the basins of cooling water which for many decades have served as "temporary" storage locations for spent fuel rods. When the water evaporates, the temperature in the basins rises both literally and metaphorically. There are nearly 450 nuclear power plants on Earth. Perhaps all this radioactivity (which will be around for billions of years), will give rise to exciting new mutations that will compensate for all plant and animal species we humans have made extinct? Or will this simply be the last time we give the finger to the rest of the planet from beyond our graves?

Two other long-lasting “gifts” that we leave behind us are a result of coal mining - "mountaintop removal", which disfigures the landscape, and a "redesigned" atmosphere. In this context, humanity is an increasingly violent volcanic eruption that has lasted without interruption since the 1700s. The geological cycle will eventually bring CO2 levels back to what existed before humans began to influene the climate, but it will take approximately 100 000 years. Or longer.

On a somewhat smaller level, we will leave a lot of (car) tires behind us. When natural rubber is vulcanized (heated and mixed with finely powdered sulfur), the end product is one big molecule. Since World War II, we can produce synthetic rubber instead of natural rubber with the help of the oil-extracted hydrocarbons styrene/polystyrene and butadiene (today there are many different kinds of synthetic rubber, but this combination is still used in 50% of the total synthetic rubber production). The world's largest rubber factory (Goodyear) is located in Texas, conveniently connected to some of the world's largest oil refineries and to the industrial megaplex that stretches from Houston and 80 km along the coast of the Gulf of Mexico.

The process of vulcanizing rubber is unfortunately irreversible - you can not melt down a tire and produce something else out of it. Tires are here to stay, and until evolution produces a microbe that likes to eat its hydrocarbons spiked with sulfur, only ozone and ultraviolet rays can break down the rubber-sulfur atoms. You could by all means burn the tires, but that is hardly a good idea:

”With all that carbon in tires, they can also be burned, releasing considerable energy, which makes them hard to extinguish, along with surprising amounts of oily soot that contains some noxious components we invented in a hurry during World War II.”

In the United States, on average one third of a billion tires are thrown away annually (one tire per person). Add to that the tires from the rest of the world. We might not leave as much as a trillion tires behind us on earth, but by now we have probably enriched the environment with hundreds of billions of virtually non-degradable car tires.

Some of the longest-lasting man-made artifacts are located in Texas, along the Gulf of Mexico coast. There are approximately 500 underground salt domes located hundreds of meters below ground and whose contents have been dissolved by water (being pumped in by humans), and whose walls consist of impermeable salt crystals. The domes are used as a place for storage fossil gases, including the most hazardous and flammable ones, such as ethylene. The best thing future explorers can do is to leave these dangerous substance where they are (stored under extreme pressure), but how could they know? A topic that Weisman touches on several times in the book is the challenge of communicating that some places are dangerous, or in some other way making future explorers understand that they should leave certain locations alone (e.g. storage locations for uranium).

What would happen to all above-ground structures in this huge industrial park? Weisman refers to all the products resulting from the refining process in an almost poetic manner: “the geometry of petro-chemistry: circles, spheres, and cylinders – some tall and thin, some short and fla, some wide and round."

If someone has time to press the stop button, there would be no immediate danger, but the petrochemical products would eventually leak out or be dissolved in the air as the tanks rust away. If instead the whole machinery would continue to run but unmonitored, pressures and temperatures would remain high and the outcome would be widespread explosions and fires.

Maybe a big chain reaction would burn up the whole caboodle - possibly during a period of several weeks, or perhaps as a long series of more isolated incidents which are spread out over time.

But if there was a chain reaction in which several petrochemical plants burned up at the same time, many extremely toxic substances would be emitted into the air simultaneously (such as hydrogen cyanide, the active component in the WWII extermination camp gas Zyklon B). In the worst case scenario, this would cause a chemical “mini-nuclear winter” with dire consequences to say the least:

”They would also release chlorinated compounds like dioxins and furans from burning plastics. And you’d get lead, chromium, and mercury attached to the soot. Europe and North America, with the biggest concentrations of refineries and chemical plants, would be the most contaminated. But the clouds would disperse through the world. The next generation of plants and animals, the ones that didn’t die, might need to mutate”

In this less than cheerful tone, I end this text about what we humans would leave behind us if we disappeared from the earth's surface from one day to the next. Since the reason for our disappearance is a mystery in the book, it is difficult to know whether Weisman’s excursions into unknown territory represent a happy or unhappy ending for mankind. As a contrast to all the toxins and all the misery that we would leave behind us, our mysterious disappearance would also mean that most plants and animals on earth would flourish, since plants and animals would thrive where there are no people. An interesting example referred to by Weisman (in addition to Chernobyl which was mentioned above), is the demilitarized zone between North and South Korea, and other similar areas of conflict in the world that are too dangerous for people to stay in. In practice, those areas function as nature reserves and they are teeming with biodiversity.

"The World Without Us" also has a very interesting chapter about plastics that I have not touched on here. Rather, I intend to write another text with that chapter as a starting point. I conclude this blog text with a question that you may ponder in the meantime. There is an infinite number of gadgets made of plastic in today's society. But what happens to the plastic after we throw them away?
.
Posted by Magnus K at Saturday, October 02, 2010