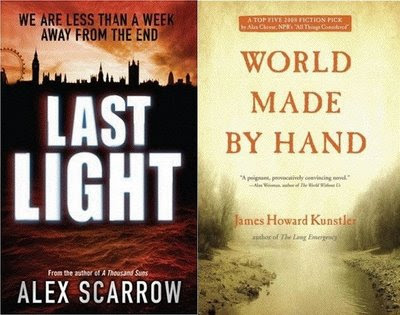 To the best of my knowledge, only two “pure” peak oil novels have been published this far. If you know any more, feel free to comment/advise me on this! Only two novels are a bit surprising considering how many non-fiction books there are about peak oil. A search for "peak oil books" on amazon.com will yield more than 200 hits.

The two books I know of are "Last Light" (2007) by Alex Scarrow and "World Made by Hand" (2008) by James Kunstler. If you have only heard of only one of them it will probably be Kunstler’s book because Kunstler is a peak oil "celebrity" who has also written "The Long Emergency". Below I write about each book in turn, and conclude with a brief comparison between the two books.

Last Light
-------------
British author Alex Scarrow has written an adrenaline-filled thriller that takes place during one week – a week in which the world is experiencing a global oil crisis and quickly goes down on its knees. The first day of the week, Monday, is the last normal day on Earth. Simultaneous attacks on several key oil chokepoints around the world immediately paralyzes the entire world's oil production and two thirds of it is down-and-out. Ordinary people do not understand the scale of the crisis and its consequences and believe that everything will be back to normal in no time at all - if they even notice the news. But already on that Monday, the British prime minister's advisors propose no further sale of petroleum products, food rationing, martial law, the total switch-off of all non-military traffic, including buses, trains and planes. The prime minister's immediate reaction is incredulity:

"This is over the top. If I get on breakfast TV tomorrow morning and announce measures like these, There'll be rioting in The Streets by lunch time!"

It is not oil production figures that are the focus of the book, but rather the social consequences of a radical and immediate reduction of available oil. With an apocalyptic tone, the author vividly describes how quickly the thin veneer of civilization dissolves into thin air when electricity is lost, when water no longer comes from the tap, when the food stores are empty and when the police disappears. Many incidents of lawlessness and riots are depicted in the book.

The main characters of the book are a family that consists of:
- Andy - father (a geologist and a somber peak oil proponent)
- Jenny - mother (sincerely tired of her husband's doomsday prophecies and just about to separate from him)
- Leona - daughter (a 20-year-old university student who is also sick of her father's warnings and who is only partially aware of the fact that she knows about a secret of the utmost importance).
- The family also includes the young son Jacob who is 7 years old, but his only role in the book is to be protected and to be taken care of.

"The walls of his study were filled with diagrams, charts, geological maps. He had become one-dimensional over that damned fixation of his. It had eroded the funny, complex, charming personality that he had once been, and now it seemed that anything that he could be bothered to say to [Jenny], in some oblique way, linked back to this self-destructive, doom-laden of his fascination with the end of the world."

The book is an exciting thriller and the story moves forward at a furious pace. This is a book especially for those who “woke up” a few years ago and with horror realized the social consequences of declining availability of oil, but then failed to convince others (including friends and family) about the weight of the issue. There are many places in the book where such readers may beat their chests and exclaim "What did I tell you!". In the end of the book there are also a lot of goodies for conspiracy theorists...

Despite their previous skeptic attitude, Jenny and Leona are one step ahead when it really counts. Years of unwelcome sermons about the (possible) imminent destruction have left their mark. They are therefore faster than the people around them to understand what is happening, and thus think clearer and better about how to (try to) take appropriate action.

"Andy's warning, his advance warning ... the one they should have heeded a little earlier than this, had sort of paid off, kind of. Of course, if [Jenny had] listened to him four or five years ago, they'd be living in some secluded valley in Wales, with an established vegetable garden, a water well, maybe some chickens, a generator and a turbine."

Unfortunately, Jenny went to Manchester on Monday for a job interview and spends most of the book/week trying to get back to London and her children. Tuesday evening, stuck somewhere between Manchester and London, she has to admit to herself that Andy was right all the time:

"If she now, finally, had come round to trusting Andy's prophetic wisdom [...] then she had to concede this wasn’t going to sort itself out in a couple of days. Things were going to get worse. "

Andy is even worse off because he is in Iraq when all hell breaks loose, and spends most of the book/week trying to get out of there. Except for the very exciting story, the main theme of the book is the vulnerability of modern society and how dependent we are on our current energy infrastructure. The Prime Minister's advisor summarizes the core message of the book sentenciously:

"It's a very fragile world [prime minister], very fragile, built on very vulnerable interdependencies. And something like this ... what's been happening today, really could bring the whole lot down. "

The story in Kunstler’s book is set in the small town of Union Grove in the state of New York some time after peak oil. Globalization is dead and buried and the people in the story nowadays know very little about the world around them.

"There were no distant markets to send [things] to because shipping anything was slow at best and often unreliable, and travel was something you just didn’t do anymore.

The few times when electricity temporarily comes back, what can be heard on the radio is mostly crazy religious fundamentalists. Sometime in the past, there have been two nuclear explosions over Washington DC and Los Angeles, but perpetrators and motives are shrouded in mystery. The U.S. has some sort of president and government that may or may not be seated in Minneapolis, but if this is true, they are so distant that they could just as well be sitting on the moon. Beyond globalization, both nations and industrialization have collapsed and society (small scale and with a focus on agriculture and practical crafts) must be built by hand - stone by stone and wooden plank by wooden plank.

”We’d gone from a few people using machines to grow monoculture crops and process them for everybody else, to a society in which at least half the people used tools skillfully with human and animal muscle to feed the other half. […] These days, most anyone who had survived was in good physical condition because life was so relentlessly physical.”

The exact year or how much time has passed since the world embarked on this new course is unclear, but a good guess is that the year is somewhere between 2020 and 2025 and that the point of divergence happened about ten years earlier. The population has been strongly decimated, mainly due to diseases and epidemics which have arrived in waves after the modern world and the modern health care system collapsed.

The main protagonist is Robert Earl, now a skilled carpenter in his wife's hometown, and with a past as a manager in the software industry. His wife, daughter and parents in law have all passed away in diseases, and his son left several years ago as a 19-year-old to "see the world". Robert and the rest of the residents of Union Grove are suffering from a kind of low-level depression, which mainly manifests itself as discouragement and lack of initiative. The book is partly about their way back to hope for a better future.

Besides the small-town residents, three other groups also play important an important role in the book:
- "The Proletarians" who live in a trailer park outside of town. Less respectable than small-town residents, but also more pushy, more active and more tattooed. This group has taken control of the city's old landfill (now a treasure trove) and they make their living on "asset stripping", i.e. traveling around in the countryside and disassembling and recycling everything that has any value whatsoever.
- The plantation owner who lives some distance from the city and "cares for" his workers. This social system is similar to a feudal system or an old cotton plantation in the South. Some people are willing to give up their autonomy and voluntarily settle as "serfs" since the plantation is well ordered and workers are served three meals a day.
- The travelling religious group (cult?) which has fled from racial tensions in the South and makes Union Grove its new home. The group is led by a charismatic preacher who is very driven and forward. The group is well organized but irritates non-members by insistent attempts to convert and recruit new members. Some members ("brothers") are former soldiers with combat experience (that come in handy in the story).

It’s hard to get away from the feeling that Kunstler’s novel is partly an addendum to his previous book “The Long Emergency”. A world made by hand is simply a way of describing the world "on the other side of the tunnel" (peak oil) in the form of a novel. Much of what Kunstler writes about in “The Long Emergency” is exactly what has happened in the world where “World Made by Hand” takes place. The book may be effective as a pedagogical way of depicting a post-peak oil world, but if unfortunately feels less successful as a work of fiction.


The two books differ a lot from each other. Where “Light” is a fast-paced thriller, the story in “Hand” moves forward at a much slower pace. Where “Light” describes the events of the actual collapse, “Hand” only vaguely refers the collapse which took place several years ago. I read “Hand” over the course of several weeks and “Light” in a few days. Although James Kunstler is the more wellknown author, it is Alex Scarrow’s book that I have to recommend. Based on the three books by Kunstler I have read, I think Kunstler is better as a non-fiction writer, and rather than recommending “Hand”, I recommend "The Long Emergency” which concerns the same topics but written in the form of non-fiction.
.
Posted by Magnus K at Sunday, December 20, 2009